On November 11, just after the beginning of winter, the weather in Leling City, Texas was a bit cold, but the production workshop of Taishan Sports Industry Group Co., Ltd. (hereinafter referred to as “Taishan Sports”) was in full swing.

“Boom, boom…” The monotonous and repeated mechanical knocking sound came, and the frame of a bicycle is undergoing an impact test. This test simulates the maximum impact force encountered by a bicycle when riding. The product will not be put into mass production until the test is passed. The popularity of outdoor cycling has led to an influx of orders for Taishan Sports’ high-end sports bikes.

Founded in 1978, Taishan Sports, after more than 40 years of development, started from a family workshop of hand-sewn sports mats, and achieved a historical leap in innovation and development. The brand value is as high as 26.3 billion yuan, and it has become a legend in the national sports industry.

Build a famous sports city with special characteristics and create a city card of “Sports City, Vibrant Dezhou”. At present, Dezhou has formed the only high-end sports equipment characteristic industry cluster in the province led by Taishan Sports Group. 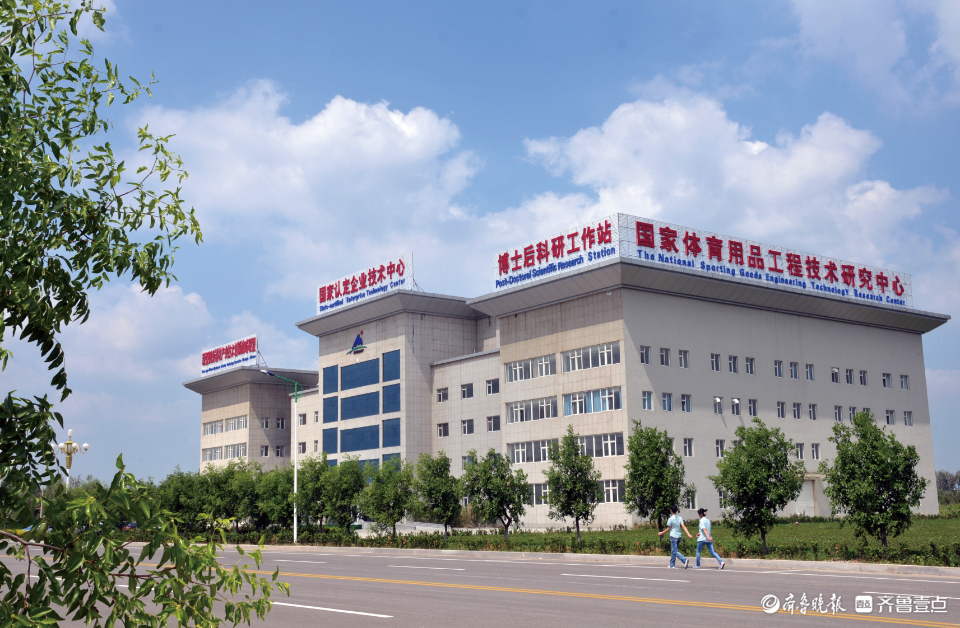 From learning to do it yourself

If you travel back in time and space, go back to 1978, and tell Bian Zhiliang, who was only 20 years old at the time, the fruitful results today, he will definitely say that this is simply a fantasy. He has never heard of terms such as the International Olympic Committee and the Olympic Games, and he never imagined that in the future, this “Kangtou Workshop” will eventually grow into the largest equipment supplier for the Olympic Games. 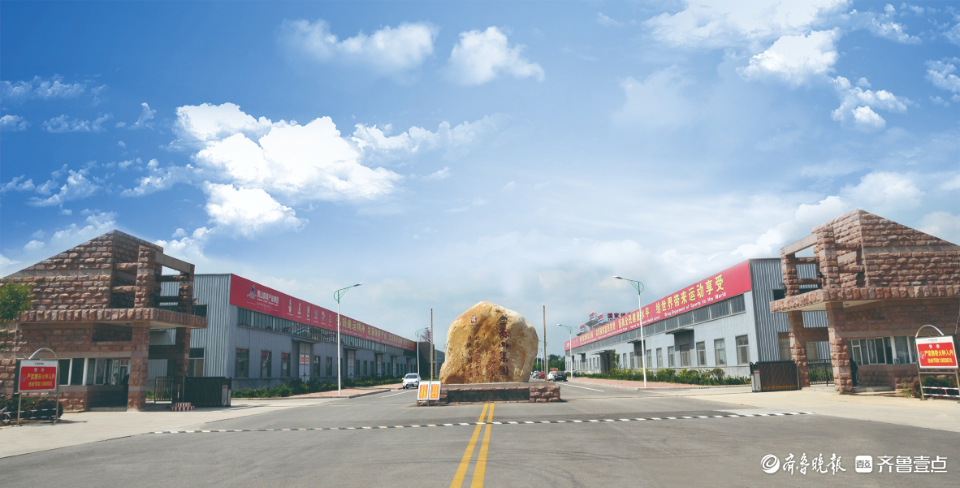 As the founder of Taishan Sports Industry Group Co., Ltd., in 1978, Bian Zhiliang and his wife made the first batch of products of Taishan Sports in a small kang at home – 10 pieces of sports training customized by Shandong Police Academy. mat.

At the end of 1978, Bian Zhiliang received a self-employed business license and established the Taishan Sports Equipment Factory in Leling County.

In 1989, the Pan Pacific Judo Championships were held in Beijing, and the mats imported from Japan that were originally scheduled to be used in the competition were not in place in time. The organizers of the competition were very anxious, and accidentally saw that the training mat provided by Taishan Sports was almost exactly the same as the Japanese mat, and the quality was not bad. Taishan Sports seized this golden opportunity and let its products enter the international arena. In the following year, Beijing held the first comprehensive international sports competition after China’s reform and opening up—the Beijing Asian Games, and the products of Taishan Sports made a large-scale appearance in the Asian Games.

On July 13, 2001, Beijing successfully bid for the Olympic Games. Bian Zhiliang said to the employees: “We Taishan Sports must seize this opportunity.”

In the 2008 Beijing Olympic Games, a total of 302 gold medals were produced, of which 122 were produced on Taishan equipment, accounting for more than 40%. Taishan became the largest equipment supplier in the history of the Olympic Games in one fell swoop. This is also the first time that a national brand has broken the foreign monopoly and become the largest Olympic supplier.

In 2021, Bian Qingfeng, the new generation helm of Taishan Sports, will lead his team to compete in the Tokyo Olympics. As a national brand of China, Bian Qingfeng will lead the service team of Taishan Sports to overcome the difficulties of the epidemic. Achieve new breakthroughs and provide tens of thousands of pieces of equipment for the Tokyo Olympics. 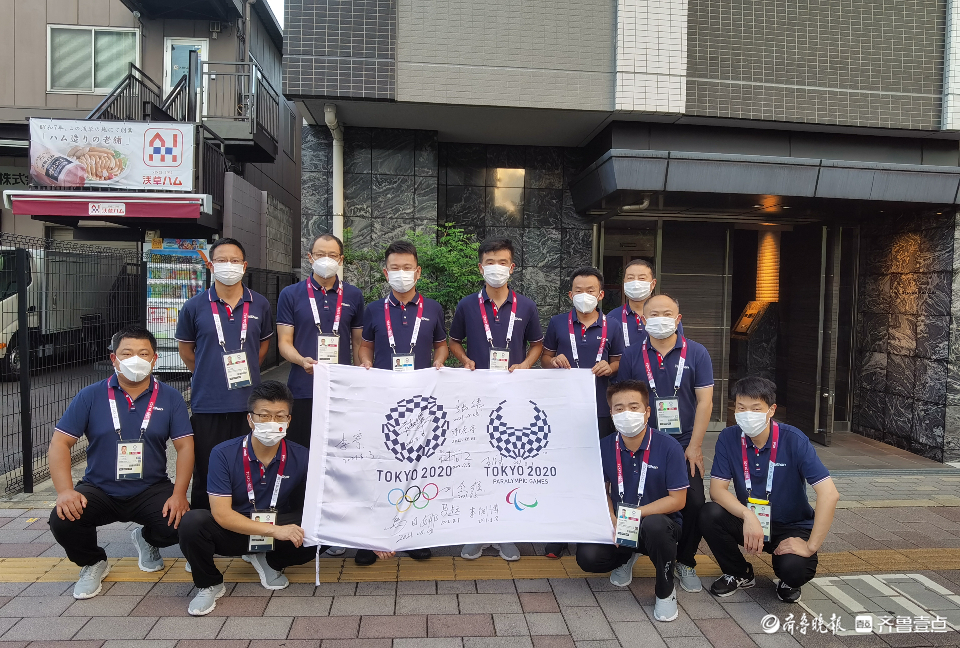 In July 2021, Bian Qingfeng led Taishan Sports to the Tokyo Olympics. (The third from the left in the back row is Bian Qingfeng)

On October 27, 2021, the 100-day countdown to the Beijing Winter Olympics, the delivery ceremony of the 2022 Winter Olympics snow wax car was held in Beijing. Previously, the core technology of snow wax cars has been monopolized by developed countries for ice and snow sports for a long time. The development and production of snow wax cars has always been a blank in our country in the past. Taishan Sports not only participated in the independent design and research and development of the snow wax car, and achieved a number of breakthroughs, but also equipped the snow wax car with domestic snow wax, anti-epidemic equipment, fitness equipment and other equipment and facilities to better provide protection and support for athletes. Serve. 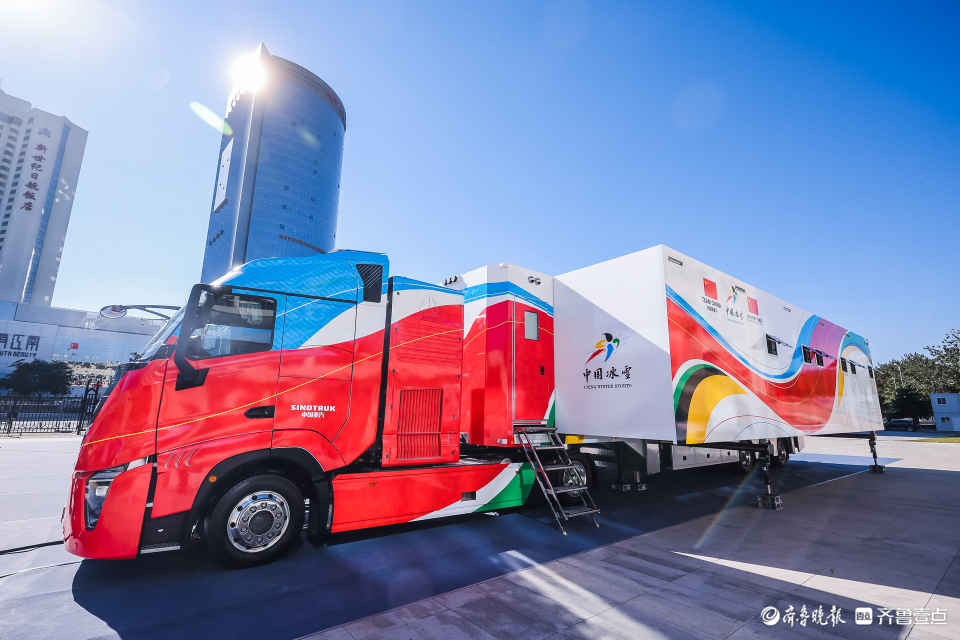 From coarse to precise

Traditional production methods are developing towards standardization and informationization

2008 is an extraordinary year. In this year, China successfully hosted the Olympic Games. For Taishan Sports, 2008 is also an important watershed.

From the success of the Olympic bid to the successful holding of the Beijing Olympic Games, in the seven years, Taishan Sports “every day is like a college entrance examination”. With the help of the Beijing Olympic stage, Taishan Sports has transformed from a local private enterprise into a large enterprise with an international brand. The development strategy of Taishan Sports has changed from “doing The transformation from “products” to “setting standards” no longer follows European and American standards. Therefore, since 2008, relying on the Shenzhen Branch of the Chinese Academy of Sciences, Taishan Sports has gradually expanded the original 40-person R&D team to more than 300 people, built Taishan Sports’ own laboratories and testing rooms, and cooperated with many famous universities at home and abroad. On the road of independent innovation and self-reliance.

If a worker wants to do a good job, he must first sharpen his tools. At the start-up stage of Taishan Sports, there was no sophisticated testing equipment, so the human body was used for testing. In order to test the softness, rebound parameters, and safety of the mat, Bian Zhiliang once jumped onto the mat from a three-meter-high roof. Now, using scanning electron microscopes (SEM), intelligent drop weight impact testing machines, 3D printers and other instruments, groups of sophisticated data can be successfully detected. 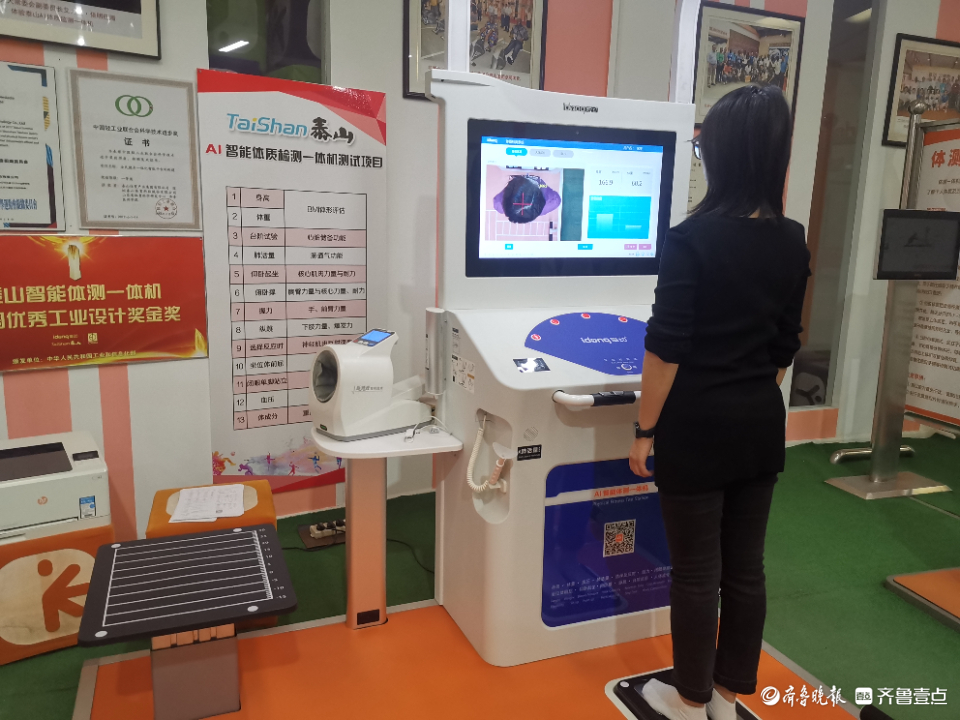 Today, Taishan Sports has participated in the formulation of five major international and domestic product standards, including indoor and outdoor fitness equipment, artificial turf and sports engineering, carbon fiber bicycles, intelligent physical measurement all-in-one machines, ice and snow products, and participated in the formulation of more than 200 domestic and international standards. There are more than 1,000 R&D personnel, and more than 200 products have passed the certification of the International Individual Association.

In Bian Qingfeng’s view, every ten years is a period of change, and this period is getting shorter and shorter. To maintain the competitiveness of an enterprise in the field of sports and not be eliminated, it is necessary not only to produce good products and master international standards, but also to Pay attention to scientific and technological research and development, increase investment, innovate, and develop towards intelligence, data, digitization and automation.

“In 2008, we had the idea of ​​changing. If we want long-term and sustainable development, we must find the direction of development and base ourselves on technological innovation.” Bian Qingfeng said.

In recent years, Taishan Sports has focused on the rapid rise of high-end equipment manufacturing, intelligent manufacturing, and the Internet of Things, planning and deploying the construction of “Taishan Sports International Industrial Park”. The sector is committed to building a 100-billion-level industrial cluster with a complete industrial structure, a complete industrial chain, and mastering core technologies such as artificial intelligence big data, chips, and new materials in the field of sports and health.

Currently under construction, there are three high-end intelligent manufacturing high-tech projects, including an annual output of 120,000 ultra-light new material smart carbon fiber bicycles, an annual output of 2 million sets of home smart fitness bags, and an annual output of 20 million square meters of functional artificial grass intelligent production projects. To fill the domestic gap, a number of new materials and new technologies are internationally leading. It will also promote the mutual benefit and sound development of the entire sports industry chain, and realize the comprehensive layout and cooperation of “buying the world and selling the world”. 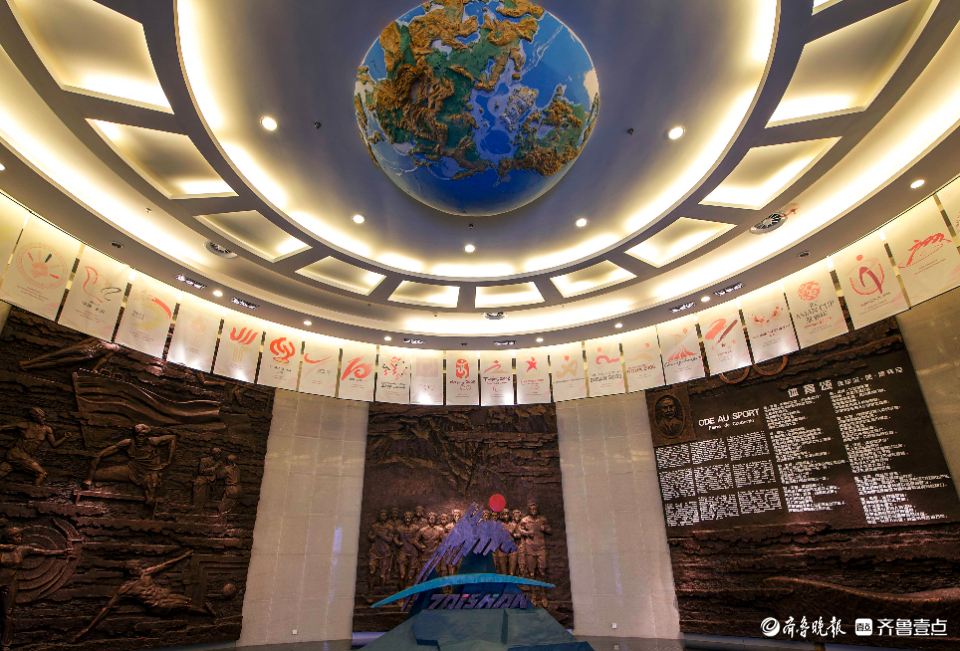 From Competitive Sports to National Sports

Olympic quality flying into the homes of ordinary people

Taishan Ruibao is the official designated car of the national team. In the Olympic Games, athletes rode the Ruibao chariot and broke many world records. In recent years, outdoor cycling has set off an upsurge. Taishan Sports has increased the development of civilian high-end sports bicycles. Different from ordinary bicycles, the sports bicycles produced by Taishan Sports are made of carbon fiber materials, which are so light that they can be easily carried by one hand. The price ranges from 6,000 yuan to tens of thousands of yuan each. The riding craze has brought about “busy orders”. Bian Qingfeng told reporters that orders have been scheduled until 2023.

In July and August 2022, Taishan Sports has successively hosted the National Youth Gymnastics Championships and the National Youth Gymnastics U Series Championships, as well as the 2022 “General Sports Cup” National Gymnastics Team Championships. The national team athletes were organized to carry out the activity of “going to the grassroots and entering the enterprise”, which realized the gymnastics competition at the grassroots level, entered the enterprise, entered the countryside, and entered the community. It widely publicized the significance of national fitness and drove the national fitness boom in Dezhou. 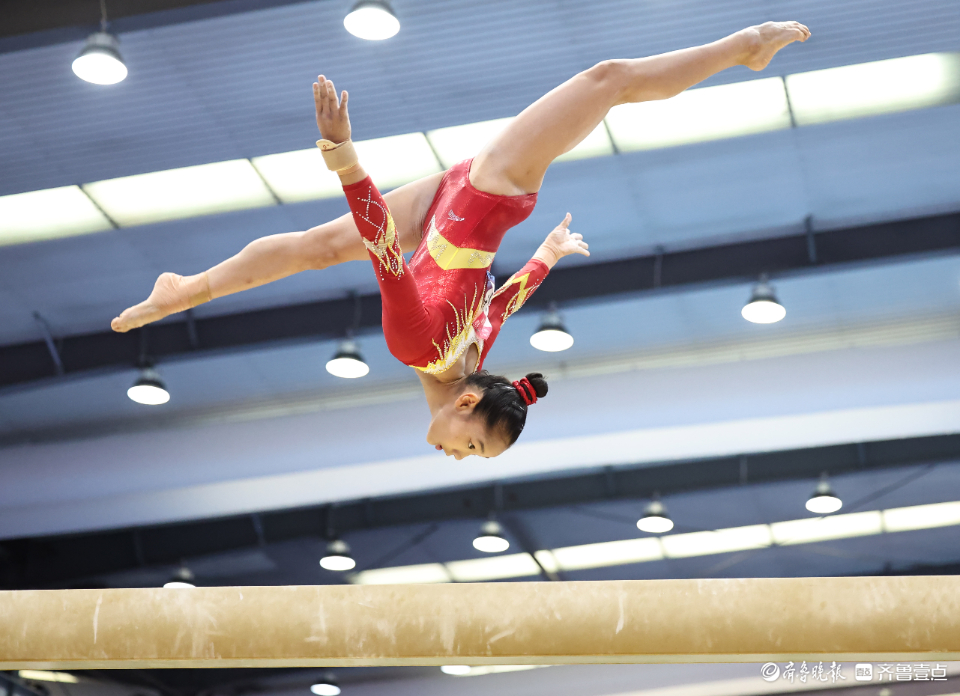 In the past few years, the national fitness policy has been continuously improved, the measures have been more powerful, and the environment has become better and better. People’s enthusiasm for promoting health through fitness has been increasing. Taishan Sports has developed national fitness, smart sports, children’s physical fitness, and health testing. Products, let the quality of professional competitions serve hundreds of millions of families, and truly realize “Olympic quality, shared by all people”.

From competitive sports to national sports, Taishan Sports is committed to promoting smart sports and scientific fitness, and to be a one-stop service provider for global sports health. “You see, the javelins, discus, and shot puts we produce are all equipped with chips, which record various values ​​at any time. Through later comparison and calculation of big data, different training plans are proposed for athletes.” Bian Qingfeng introduced to reporters that Taishan Sports has experienced For more than 10 years, invested hundreds of millions of yuan, developed a “human-computer interaction chip” based on the cutting-edge “computer vision recognition technology”, became the only Chinese core in the sports industry, and built a world-leading and nationally unique physical fitness testing big data platform and a scientific fitness operation platform .

Enterprises have strength, and cities have confidence. As a leading sports enterprise, Bian Qingfeng modestly stated that Taishan Sports has only contributed a small amount to the construction of a famous sports city in Dezhou.

“Nowadays, the sports industry in Texas is showing a booming scene from small to large. The sports facilities in Texas are becoming more and more perfect. Now you can see sports equipment, bicycle tracks, sports parks and stadiums in communities and rural areas. It is also increasing, and schools are paying more and more attention to sports.” For this series of changes, Bian Qingfeng saw it in his eyes. He said that in the future, we must make good use of existing resources, implement new development concepts, and integrate into the new development pattern. Seek new development for the city’s sports industry, and make greater contributions to building a healthy China and a strong sports country.